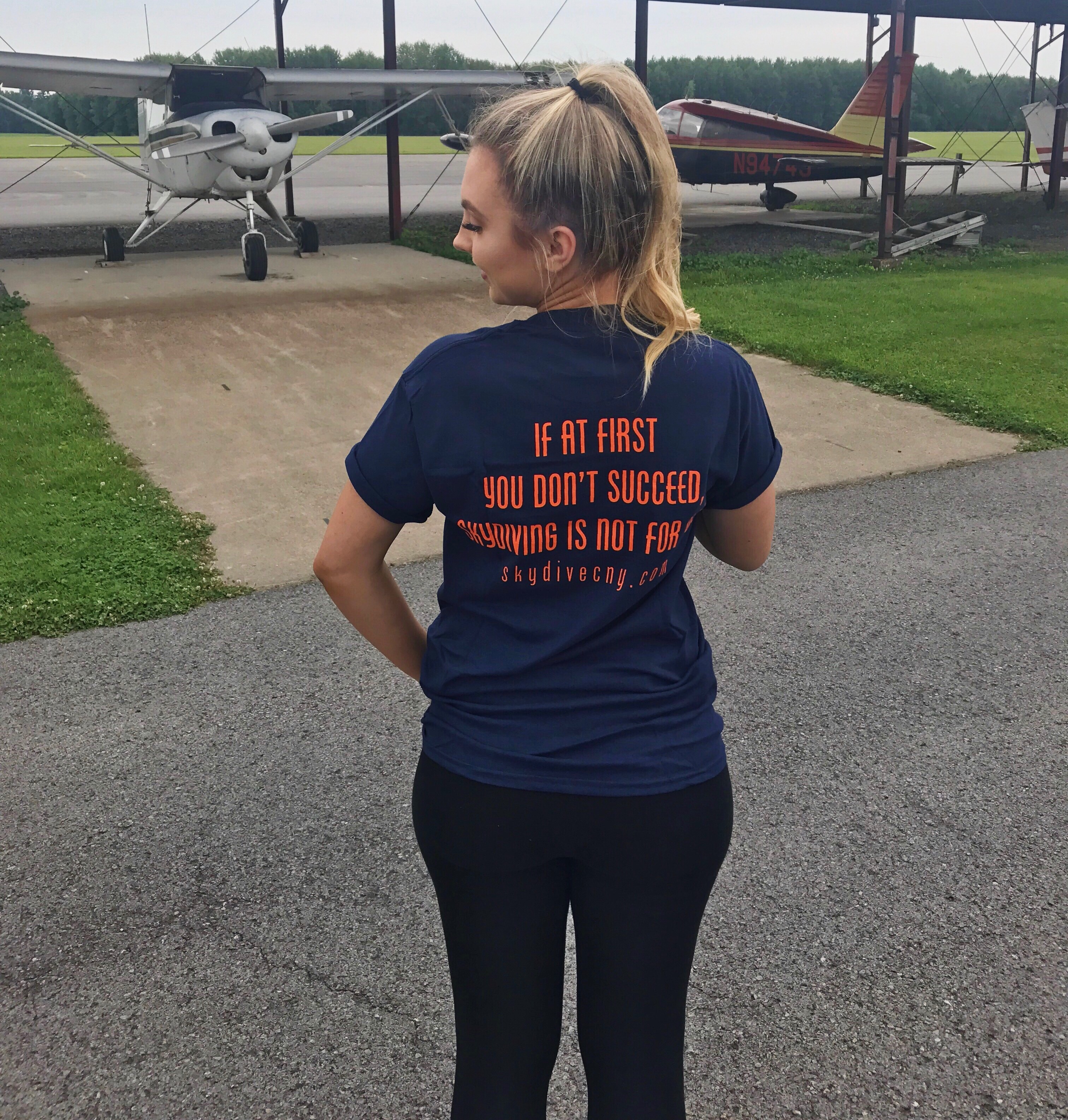 I have never had the desire to skydive my entire life. However, when my boyfriend and his friends organized a skydiving excursion, I knew if I didn’t participate, I would regret it. (If your friends jump out of a plane, would you? The answer is yes.) So because of FOMO, I went with my friends to Skydive CNY for the death-defying stunt. On the original day we were scheduled, the weather was a bit cloudy, but we still had to report so we could go through the training. There were nine of us in the group. When we arrived, they weighed us. This was needed to determine which of us went up with who in the small plane as they only took two of us at a time. Well, the weeks prior when I was preparing myself to go skydiving, I assumed I would be able to go up with my boyfriend, Cody, for moral support. However, I weighed the least in our group and had to go up with Cody’s friend Mark instead. (Mark, you’re great, no offense.) I began to freak out a bit but there was obviously nothing I could do. Well, the other thing was that Mark is from about four hours away and came to visit just for this experience. So they decided to take him up first since it would be difficult for him to come back and reschedule. That’s right… I had to go FIRST.

Well, we practiced our form during free-fall, went over how to land, suited up, met who we were going to be attached to, and before I knew it, I was up in a plane looking at the Finger Lakes. It was a pretty stunning view, even during cloudy weather. I went to college near the airport so I was looking for familiar sites. The plane ride lasted around 20 minutes. I was still nervous/excited at this point but then they opened the door… The wind flew in and sh*t got real quick. You already posted about it on Facebook so you can’t back out now, Natasha, I told myself as I took a step out of the plane and we tumbled out. A lot of expletives were in my thoughts at this point as we flipped around until eventually, I could see the ground. I don’t think I screamed during free-fall, not sure if it was out of pure shock that I would actually jump out of a plane, or because the rush of air made it difficult. Before I knew it, the skydiving instructor pulled the parachute and we began to float. I was told the free-falling lasted around 45 seconds but it seemed more like 10. It was so surreal to be floating on air and it went by so fast. After he pulled the chute, I let out a little scream out of relief. We slowly floated down as I got a last look at the views from above. I was technically supposed to land on my butt but I would just like to say that (much to my instructor’s dismay, I’m sure) I landed on my feet. I made it! I hugged my instructor for saving my life and went back to join the rest of the group.

After Mark and I landed, the next pair went up. However, the cloud cover got lower and they had to come back down without jumping. To complete a successful tandem jump, you need to jump from about 8,000-10,000 feet and they were only reaching about 5,000. We had nothing else to do so we decided to wait it out a bit. After some time, the second pair went up and successfully jumped. Unfortunately, they were the last to go. The other five in the group had to reschedule because of the weather. It was definitely a bummer as I didn’t even want to go initially and I got to go that day. I also wanted to talk about the exciting experience but felt guilty as only three other people jumped. They rescheduled for two weeks later and thankfully were able to jump successfully.

I do have just two complaints. The first is that my ears hurt SO BADLY after I went. I tried to pop them but the feeling didn’t go away for several minutes and gave me a headache. But, I was the only one to experience this pain. If you go, I would ask your instructor if there is something you can do to prevent it. The second complaint is about the photos. I obviously wanted to showcase my jump with photos but they had a hefty price tag of $89 on top of the initial $219 jump. Sure, you receive around 300 photos, but because of the additional near $100, most of us did not purchase photos. I left the day I jumped without purchasing photos. After some thought, I decided it would be a good keepsake so when I returned with the group for the second time, I asked them if they kept photos from previous jumps. They said yes, they usually keep them for about a year. I was so excited and asked to purchase my photos so I could post them on my blog as proof that I actually did jump. For some strange reason, they could not find my photos. I left them my cellphone number and they said they would call when they had a chance to look for them. When I got home, I received a voicemail that they could not find them but said if I returned, they would try again for me. The issue is, I do not plan on returning at least in the next year to skydive once again. It was an investment to begin with and it is not something I can do on a daily basis. I am disappointed they did not at least offer free photos for the next time if I chose to return, even though it is partially my fault for not buying the photos in the first place.

However, despite those complaints, the entire experience was incredible and I would 100% do it again in the future. Roller coasters and carnival rides are nothing compared to the incredible feeling of falling in the sky. I felt extremely safe with my instructor who was there for comic relief during my nerves. Skydive CNY is great and I highly recommend them.